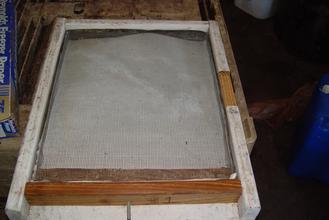 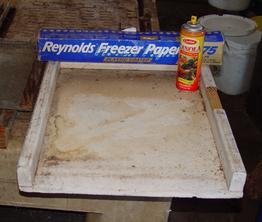 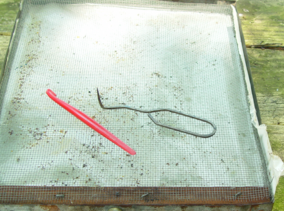 "Science is knowing, art is doing, and common sense is knowing and doing on the basis of experience."Alex Shigo

Unlike most animals, each one of a drone's 10 million sperm are identical clones. Sister bees with the same father share 75% of their genes. This is far more than the 50% found in other species.
The queen naturally mates with up to 20 drones, making the colony a collection of many subfamilies (half sisters with the same mother, but different fathers).
Naturally mated Queens have a larger gene pool and do not inbreed as could happen with instrumentally inseminated queens

As queen breeders, our role is to take the information gathered by university and government scientists, apply it in our breeding program and then offer our stock to beekeepers. The following are some of the selection tests we are using in our program.

A) varroa mauling - chewing and biting the mites, which kills them .

B) selection involves montering for chewed mites on the bottom board

The way we check for mite kill is to use a bottom board that will accept a pan with a 1/8 inch hardwire cloth cover, in which we place a piece of freezer paper sprayed with cooking spray. We pull the pan after a few hours during the day.(Do not leave over night as the bees clean more at night and the pan will have too much debris) look through the droppings for mites. Then we put mites found under a 30x glass and look for mites that have been pinched  or legs pulled off and killed during the grooming process, count the number pinched compare to the number not pinched and killed. We only use queens for breeders that have a 75% or more pinched rate.

The mechanism of resistance against this mite is as yet unknown, but it does clearly exist. Recent evidence suggests that grooming behavior as the mites migrate from one bee to another may be a means of control. Fortunately this trait appears to be controlled by dominant gene(s) which occurs widely in honey bees. Bees that will kill Varroa Mites will also kill Tracheal Mites

There are several methods of testing for hygienic behavior. They all are based on the rate of removal of brood in sealed cells which has been killed.

Honeybees can have a lethal gene which can cause spotty brood patterns known as "shot brood," when as little as 50% of the brood survives. Selecting for high brood viability greatly increases the efficiency and productivity of colonies. We only breed from Queens with good solid brood patterns.

Our first test is we work all colonies in the apiary, during a honey flow with short sleeves this ensures a gentle temperament is maintained. The aggressive hives are culled from the outfit. We select breeder queens from only gentle, workable colonies.We do not enjoy being stung.

Comparison of honey production is made of colonies in the same apiary. We use the best honey producers with no visible mite infestation for our breeder queens.

* Some information obtained from Glenn-apiaries.com